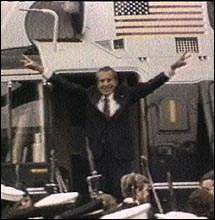 Gov. Jim Doyle (pictured here) announced that he will immediately undertake a trade mission to nations lacking basic diplomatic ties to the United States. In a statement released last night, the Governor said that it was important to open lines of communication with nations that do not yet have strong ties to the US or to Wisconsin. "By traveling to these nations, all of whom lack the most basic bilateral agreements with the US, such as, for example, extradition treaties, we hope to promote new avenues of international commerce and understanding." The Governor's office declined to release his itinerary.
Posted by Rick Esenberg at 9:08 AM