Save us from this 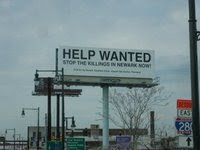 I spent Wednesday night and Thursday in Newark mediating a piece of litigation I have out there. Newark is, near as I can tell, a wholly ungentrified city. It has some commercial activity in a downtown with virtually no amenities (although they are building a fancy new arena for the New Jersey Devils). Although it was once a city of some vibrancy, it is now the ultimate urban donut hole - far worse than Detroit. On the way in from the airport (which may be its greatest municipal asset), I saw a billboard which read "Help Wanted: Stop the Killings in Newark Now!" They are apparently all over and are paid for by the Newark Teachers Union. They have been quite controversial. Critics say that it just makes things worse although they were already pretty bad.
They propose no solution and I suspect that it because no one can think of one. There is a point after which none of the standard liberal or conservative nostrums are likely to work. Newark seems to be there.
One of the things that struck me is the extent which no seems to care. Although we all think of that big area out there as "New York metro," people do not regard themselves as New Yorkers. They are from New Jersey. Yet Newark is seen as an irredeemably lost cause. I'd wonder out loud why Newark couldn't become a more affordable alternative to Manhattan which is about twenty minutes by train (you spend a lot of time sitting around in mediations which are mostly a form of shuttle diplomacy). Some towns across the river like Jersey City have done so, but I guess that they are getting pretty expensive as well. The response was that "people" just don't want to live in Newark.
You could see it was once an interesting place. You wonder why it can't be again.
Posted by Rick Esenberg at 7:46 AM