Personal bragging about things that I did not do

Yesterday I went out to Hartland to watch our niece play in the sectional girl's soccer finals for Mequon Homestead against Wauwatosa West. The Highlanders came back from a 2-o deficit to win 3-2 and advance to state. It was one of those classic "refuse to quit" stories. Very large congratulations to Monica and her teammates. They showed a lot of the stuff that sports is supposed to teach us.

Since I don't get to a lot of high school sporting events (it may have been the first one since 1974), one of the things that struck me was the "boy jocks" cheering section which seemed to be largely made up of Homestead football players. Back when I was in high school, male athletes were indifferent to or actively disdainful of girl's sports. I myself wrote a (slightly) satirical column in the school paper about the new (it was) girl's basketball team and couldn't get a date for three months (not that there was anything unusual about that).

But these guys (who won the state championship themselves) were way into the game. They were rabid. At the end of the game, they fired up the suburban parents - a group that is not generally shy about cheering for their children.

And speaking of cheering, I feel compelled to note again Shark II's graduation from UWM. 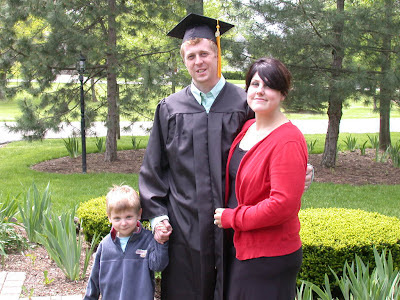 The two the left are my lineal descendants which means that you ought to pray for the poor woman on the right.
Posted by Rick Esenberg at 7:49 AM

Too bad you don't have a student at UWM anymore and apparently never went to its nationally ranked women's basketball team's games? The UWM male cheering section for years now at those games also is a treat to see -- and a good sign for a better future for your grandson as well as any future granddaughters.

Package deal. We also pray for the Reddess...

And as a Marquette High guy, might I say that we never had a conflict so ready for Aeschylus as you described with Homestead c. 1974.

It is obvious the human species is not in danger of becoming extinct because girls play sports previously considered for boys only.