In several recent posts, I pointed out that the now infamous "trick" of Warmergate involved grafting two very different measures together in a single graph to create the illusion that they were the same thing. Prominent English scientist, Phillip Stott, summed it up in an excellent summary of the issue in yesterday's Daily Mail. Here's what he said in reference to the "trick." "Any scientist ought to know that you just can’t mix and match proxy and actual data ...."

Our friend Illusory Tenant says "that is not at all what was done."

It is precisely what was done.. Directly mixing apples and oranges was the recently cashiered Phil Jones' "trick." He grafted measured temperature date onto a graph of "reconstructions" of temperature based on "proxy" data (i.e., data other than measured temperature)for the period in which the proxy data doesn't correlate with the measured temperature. This graph, combining two different things and presenting them as the same, was then published in a World Meterological Organization report designed to influence policymakers. The graph was placed on the cover of the report and shows a version of the 1000 year "hockey stick" used to demonstrate that the measured warming trend (which covers only the past 150 years or so) is historically unique.

Tom apparently thinks that the report disclosed what was done by a vague reference to using both "historical and long instrumental" records as well as a reference to another publication that may have provided a better explanation.

Hardly. The report showed several different reconstructions. While the caption may have disclosed the both proxy and instrumental records were used, it did not say that they were combined together.

What one would have needed to do was to admit that the proxy data used in one of the reconstructions only seems to reflect actual temperature for the first portion of the measured period and either stop there or clearly indicate where the reconstruction ends or the actual temperatures have been inserted. I know Tom, who is a member of the bar, doesn't practice law, but, believe me, I would salivate at the opportunity to cross examine an expert who tried something like this. (But Tom says he does practice law and, believe it or not, I am glad for it. We like our grads to be successful and he seems happy with his practice.)

Keep in mind, that this is a critical issue. As noted in my earlier post, these reconstructions are the evidence for historically unique global warming since we do not have a long enough history of temperature data to know whether measured temperature increases are unprecedented or unusual.

Well, Tom says, all this was the cover of one report. But there is more. As Steve McIntyre relates, the IPCC also attempted to "hide the decline" in the tree ring reconstruction and seems to have done so intentionally, fearing that showing policymakers contradictory date would dilute the message if historically unprecedented AGW.

The IPCC "trick" was a little different. It did not involve grafting temperature data onto a line charting proxy data. It simply omitted the inconvenient data like this, The tree ring construction is the green line and was plotted on a chart showing graphs of other reconstructions and actual temperature data: 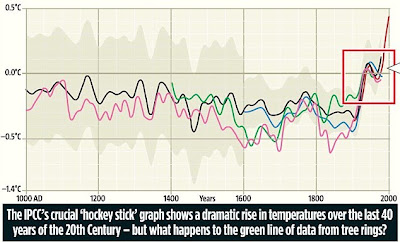 The tree ring reconstruction had recently been altered (more on that later)and now showed that tree ring data would indicate a very substantial decline in temperatures in years following 1960. That didn't happen, calling into question the accuracy of the reconstruction. So they just omitted the inconvenient data like this: 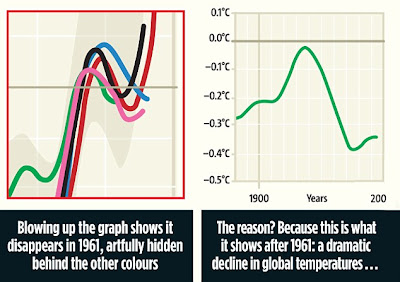 This contradicts the view that the controvesry was hidden in plain sight. The questions raised by the discrepancies between reconstructive models are precisely the things that the scientists did not want to address because, in their own words, it would be distracting and interfere with a tidy picture. Hiding complications was precisely what they wanted to do.

In fact, the IPCC report in which this was originally done offered no explanation that the reconstruction had been truncated. Steve McIntyre explains:

Contrary to claims by various climate scientists, the IPCC Third Assessment Report did not disclose the deletion of the post-1960 values. Nor did it discuss the “divergence problem”. Yes, there had been previous discussion of the problem in the peer-reviewed literature (Briffa et al 1998) – a point made over and over by Gavin Schmidt and others. But not in the IPCC Third Assessment Report. Nor was the deletion of the declining values reported or disclosed in the IPCC Third Assessment Report. [Dec 11.- IPCC TAR does contain a sly allusion to the problem; it mentions "evidence" that tree ring density variations had "changed in their response in recent decades". Contrary to claims of realclimate commenters, this does not constitute disclosure of the deletion of the post-1960 values in the controversial figure or even of the decline itself.] The hiding of the decline was made particularly artful because the potentially dangling 1960 endpoint of the Briffa reconstruction was hidden under other lines in the spaghetti graph as shown in the following blow-up:

To my knowledge, no one noticed or reported this truncation until my Climate Audit post in 2005 here. The deletion of the decline was repeated in the 2007 Assessment Report First Order and Second Order Drafts, once again without any disclosure. No dendrochronologist recorded any objection in the Review Comments to either draft. As a reviewer of the Second Order Draft, I asked the IPCC in the strongest possible terms to show the decline reported at CA here:

"Show the Briffa et al reconstruction through to its end; don’t stop in 1960. Then comment and deal with the “divergence problem” if you need to. Don’t cover up the divergence by truncating this graphic. This was done in IPCC TAR; this was misleading. (Reviewer’s comment ID #: 309-18)]"

They refused, stating that this would be “inappropriate”, though a short discussion on the divergence was added – a discussion that was itself never presented to external peer reviewers.

This after a series of e-mails expressing the desire to present a "tidy picture" and to avoid providing "fodder" to skeptics. This sounds like advocacy, not science.

To be sure, one can argue that the claims of historically unique warming are right anyway, relying on other forms of reconstruction or by arguing that the "divergence" is caused by some factor other than a flaw in the reconstruction model. Maybe you can use ice core data (or maybe you can't).

But the thing gets worse and that's where I'll go next.
Posted by Rick Esenberg at 5:19 AM

I know Tom, who is a member of the bar, doesn't practice law ...

I think you owe your readers a correction, Mr. Esenberg, and, I daresay, you owe me a public apology, unless your definition of "practicing law" is substantially different than mine.

I enjoy the give and take in our various areas of disagreement, but this is beyond the pale. I have been practicing law -- effectively -- since I was admitted to the bar.

"I have been practicing law -- effectively -- since I was admitted to the bar."

You could practice effectively yet still be a starving lawyer.

Don't I know it, counselor.

And Rick, Steve McIntyre's characterization of the IPCC Third Assessment Report is thoroughly debunked here. I can't believe you missed that, since I included the very same link in one of my December 11 posts that you were just complaining about this morning.

That is, you linked almost directly to the debunking yourself, in your previous blog post.

You might want to take a look at it before you accept as gospel McIntyre's rather egregious quote-mining.

As for the ice core (singular), you really don't want to go there, do you?

Because the fellow who dreamed it up said this: "As far as I know, the data are not adjusted according to any fancy computer climate model or anything else like that."

And as you just got finished presenting an (unconvincing, in my view) discourse on "apples v. oranges," maybe you don't want to head down that Greenland ice core (singular) path.

Incidentally, that ice core is defunct as of 2000. Reason? Too warm now!

I was misinformed about your practice and am glad to be corrected. Whatever our disagreements, I truly wish the best for MULS graduates. I will happily correct my error.

But the DC critique of McIntyre is hardly a debunking and, in fact, responds to precisely nothing in this post. They grafted apples on to oranges. They deleted inconvenient data. These are facts and in all of your dismissal of the deniers and denialists and denializers, you haven't said a thing that contradicts that.

As for the "debunking" of McIntyre which relates to a different, albeit related issue, of the motivation for what we might conveniently refer to as the "tricks," that was the subject of my next post which is now up.

The problem with the ice core (if there is one), incidentally, is not one of adjustment. But I'll get to the issues beyond the tree rings as the week wears on and I continue to look for excuses not to grade papers.

IT is confusing an innocent mistake with going "beyond the pale." In any event, I hope he accepts Rick's apology and gets on with things.

Of course I accept his apology but I don't understand why he would take some unnamed third party's word for it and not simply ask me.

And yes, the Deep Climate post debunks everything McIntyre claims in the text highlighted in blue above, specifically with reference to the IPCC Third Assessment Report.

I'm looking at a peer-reviewed article right now that contains no fewer than 107 separate references to tree ring papers in the literature.

There is far more than simply Briffa's 1998 tree ring series at issue here.

Why wouldn't he just ask you?

Clearly his proxy data fit the curve he was trying to promote.