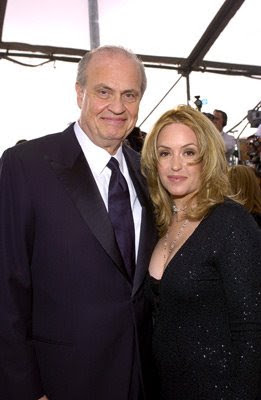 Dad29 notes that Susan Estrich thinks that Boomer women will be upset about Fred Thompson's young-enough-to-be- his-daughter wife. She notes that some women voters will be turned off by the fact that Fred shares no generational experiences with his wife. She can't recall where she was when JFK was shot (unless you believe in reincarnation, that would be nowhere, actually) or remember the same music, etc.

Patrick McIlheran comments on the insular grandiosity of Baby Boomers about their "shared experiences" and I think that the phenomenom that he refers to certainly exists. Look at all those obnoxious television commercials for retirement planners.

But I think there is a simpler explanation for Estrich's point which is, I think, true. Jeri Thompson will be a negative. Older women - with some justification - resent the fact that men their age are attracted to younger women. They resent the societal emphasis on youthful (as opposed to mature) feminine beauty. Jeri and Fred will remind them of that.

I must confess that I have two reactions to this. The first is rooted in my formative high school years as a nerd who was overlooked for older cooler (and generally "badder") guys. Part of me wants to say that payback is a bitch.

But that's all Shark and no Shepherd.

Susan is right. Putting aside baby boomer parochialism and the politics of the sixties, marital companionship may well be diminished by the absence of shared experiences.

So, being a creative nerd, I crafted a solution. I married someone who is roughly my age but looks twenty years younger.

Patrick McIlheran comments ... "[T]o me it's a grisly glimpse into the mind of a key Dem demographic."

Uh huh. Likewise, each Ann Coulter bon mot is a window to the conservative soul.

When Estrich says shared experience she means shared worldview as in, "All my friends voted for Carter, how did Reagan get elected?"

Generally, it takes a narrow mind to have a narrow view of Boomers. Continuous confusion is the lot of those who try to define Boomers.

So true, Anonymous 3:27. As a boomer, I tired long ago of the sweeping generalizations. That media creation of "the" boomers has been wrong since the beginning on just about everything beyond the numbers of births. For every silly extrapolation about my generation, there is an opposite argument that applies to as many or more of us.

The only truism about all of us is that we're getting older -- which also has happened to every generation and will again.

Some of us are smarter, though. Like this blogger, with the best line any husband ever has said about his wife. The Shark is gonna have a happy night. . . .

"So, being a creative nerd, I crafted a solution. I married someone who is roughly my age but looks twenty years younger."

Congratulations on dumping Wife #1 for Wife #2. That's certainly something to be proud of, isn't it?

You are so far from the truth. We are actually enjoying the "Big Love" life.

Rick Esenberg said...
This comment has been removed by the author.
6:54 AM

I guess I have this fan who thinks that people are interested in my life history. While I suppose I could respond with detail, that doesn't seem right or pertinent. That isn't even close to what happened but believe what you want.

Ricky, Ricky, Ricky... When the Mrs. and I took the trot down the aisle in 1973, we promised each other that we would stay married until death do us part. Now, 34 years later, we're still together.

There is no justification for reneging on the promise.

After 10 years of marriage, my husband ran off with another woman (to another state)and filed for divorce.

And sorry for the typo. People who don't think things through before they preach, frustrate me. Let me try again.

I recently came across your blog and have been reading along. I thought I would leave my first comment. I don't know what to say except that I have enjoyed reading. Nice blog. I will keep visiting this blog very often.