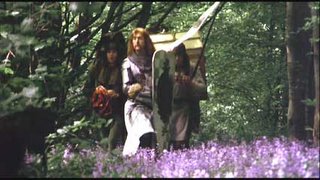 Brave Sir Robin ran away.
Bravely ran away, away!
When danger reared its ugly head,
He bravely turned his tail and fled.
Yes, brave Sir Robin turned about
And gallantly he chickened out.
Bravely taking to his feet
He beat a very brave retreat,
Bravest of the brave, Sir Robin!

Massachusetts Governor-elect Deval Patrick does not want to amend the commonwealth's constitution to ban gay marriage, calling it a "matter of conscience." But he proposes that the state legislature exercise what he sees as virtue, not by voting against the a proposed amendment supported by the signatures of over 170,000 Bay Staters, but by refusing to vote on it all. Growing a conscience apparently does not require having the courage to stand up and be counted.

Governor-elect Patrick (who was a year behind me in law school)has done this notwithstanding a ruling by the Massachusetts Supreme Judicial Court that, while it has no authority to force a vote, the legislature nevertheless has a constitutional obligation to vote. Ignoring the moral suasion of the Pope because he has no divisions is old news, but, in Massachusetts under the new Governor, this old rule apparently applies to the courts as well.

Update: It didn't work.
Posted by Rick Esenberg at 1:23 PM