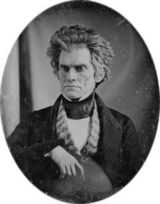 My latest post at Consitutionally Correct addresses how the Madison City Council is channeling John Calhoun. You will recall from seventh grade history that Calhoun was, among other things, a former Vice President, Secretary of State and, I think most famously, a Senator from South Carolina who defended slavery and state's rights. Calhoun believed that states could nullify any federal law that, in their view, was unconstitutional. Madison proposes going him one (or two) better by allowing individual officers to nullify the constitution itself.
Posted by Rick Esenberg at 3:10 PM

Just further proof that liberals don't take the Constitution seriously. So what would make ANYONE think they'd uphold other parts of the Constitution - federal or state - if it would help someone they disagree with?

We see this cherry-picking of the Constitution all the time when it comes to "separation of church and state".