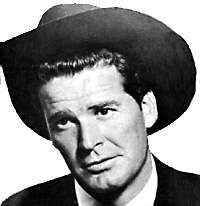 I understand that the local press will now be running this photo with every new story on Russ Feingold (D- Green Room).
So here is an interesting synopsis of the old TV western, Maverick, starring James Garner.

Maverick told the story of Bret Maverick, a card shark who lived during the Old West era. The show was originally a straightforward tale of his adventures, but it evolved when the writers began adding comedy into the scripts. Bret quickly became the television western's first mercenary, a character who would help the forces of justice only if he stood to profit from doing so. When he did have to use a gun, he wasn't much of a marksman. In fact, he was much more likely to slip out the backdoor when trouble began instead of sticking around for the fight.

Maybe he is a maverick.

The MJS calls Feingold's censure resolution a political hot potato as if the problem with it were that is were some strange and welcome truth, rather than, as it is, extravagantly irresponsible and brick dumb.

But that serves Russ' purpose. For the drum circle left (and its cymbal-wielding leaders), it's a matter of faith that Bush "broke the law" and no amount of remedial legal education is going to change that.

What Bush did - like about every President before him - was to aggressively interpret his constitutional authority. If you think he's wrong, the generally accepted course of conduct is to go to court. But Congress doesn't want Bush to stop what he's doing, so that's not going to happen.


As for Feingold, his mission is accomplished. The granolas are ga-ga:

On Democratic Web sites, Feingold, a potential 2008 presidential candidate, has been embraced for being bold and gutsy and principled. "Today, Russ Feingold is the Leader of the Democratic Party," read the headline on one liberal blog, MyDD.com.

I can't wait to see what's next from our Hero.
Posted by Rick Esenberg at 5:55 AM

Didn't Boxer and some other far leftie join Feinie in that b.s. call?

It’s difficult for me to take Russ seriously anymore.

Also, Rick, your link to me is bad--you seem to have cut off the end of the url.

I don't use the term moonbat. But for Tom Harkin ... ? I can't help but remember that while Dean was building up to the Dean scream (and don't give me the "he was overmiked thing"; you guys need to understand that this growling stuff plays to the base but gives America the creeps), he was dancing along, swinging that arm back and forth.

I suck on links. I've got to do a last minute column tonight and there is all this basketball to watch, but I'll try and fix it.

Yo, Jay, I never said a republican could'nt be a leftie or, for that matter, disagreed with. FYI I'm NO republican. I consider myself a conservative. There's a difference. I also don't vote straight party.