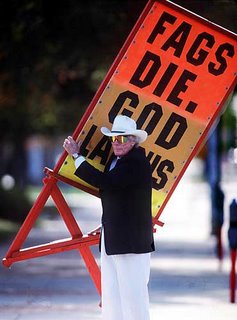 I agree with local blogger Jessica McBride who recently posted that conservatives should condemn their Cindy Sheehans. I really agree that we should all condemn Fred ("God hates f***s") Phelps. He picketed my church (St. Paul's in Milwaukee)a bit over a year ago and we are talking some very serious sociopathy. This is the guy whose website (you'll get no link from me) contains a picture of Matthew Shepherd, a gay man murdered in Wyoming as a result of, depending on who you believe, drugs or homophobia, burning in hell. I must confess that I am not always sure "What Jesus Would Do," but I am rock bottom certain that He wouldn't post that picture on His website. As I stood outside St. Paul's listening to this guy and his "followers" (about all of whom are his immediate family), I imagined his surprise when he crosses the River Styx and Shepherd is not there. I gernerally regard diagnoses of "homosexual panic" as Woolworth's psychology, but it can't be ruled out here.

But why is Phelps a "conservative" sociopath? I don't blame Jessica for assuming that he is (she was on the way to a different point), but I not so ready to acknowledge this. I suppose that Phelps probably opposes, as many conservatives do, gay marriage . I mean, I haven't heard him say so, but if he wants to burn 'em at the stake, I don't suppose that they get to walk down the aisle first.

Opposing same sex marriage wouldn't be what makes him reprehensible. There are thoughtful people whose opposition to same sex marriage has nothing to do even with a claim that homosexuality is a sin. Some of their views can be found here. The issue with Phelps is the unalloyed hated and unwillingness to tolerate(as opposed to celebrate) male homosexuality (He seems unconcerned with lesbians; see "homosexual panic" above.)

I am unaware of any mainstream - or even secondary or tertiary stream - conservatives, that spew his kind of bile against gays and lesbians. Claiming that "God hates the US" and disrupting the burial of soldiers does not sound like something in the manual of the Vast Right Wing Conspiracy. Phelps is clearly a fevered lemur, but he "belongs" to neither the left nor right.
Posted by Rick Esenberg at 8:50 PM