Call to Censure Bush Is Answered by a Mostly Empty Echo 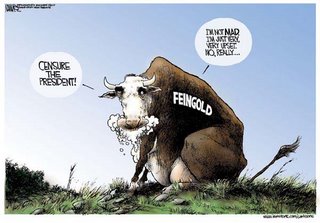 So says the New York Times in the headline for it's report on Feingold's censure hearing. Let's see which Dems on the Judiciary Committee avoided saying anything at the hearing: Kennedy, Feinstein, Durbin, Biden, Kohl and Schumer. In fact, other than Kohl(who, the Journal Sentinel tells us, wandered in for a few minutes), this bunch didn't even show, leaving us with Russ and the Senator from the People's Commune of Vermont.

Maybe the rest of the Dems on the Committee forgot their Congressional ID pins. Too bad Cynthia McKinney wasn't around to run interference through security.

Maybe they all just took a long weekend. The integrity of the Republic may be at stake and all, but the Final Four starts today.

Or maybe they just saw the whole thing as the political equivalent of Mad Cow disease.
Posted by Rick Esenberg at 5:50 AM