Say it ain't so, Phil 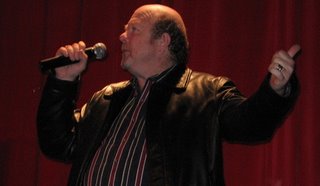 This is the funniest man in America. Phil Hendrie hosts a syndicated radio show originating in Los Angeles that is a hilarious send-up of talk radio. It's not on the air in Milwaukee, but I first heard it in LA about 8 years ago and listen on the internet.

It's hard to convey what he does. He hosts the show and generally has a series of "guests" who are actually characters he has made up and for whom he does the voices. When the show is working well, whatever story they are telling gets progressively outrageous. Although Hendrie is quite open about what he's doing on the air, there are always some people somewhere who don't get the joke and call in "outrage" over what they are hearing. The show is decidedly not politically correct, but Phil seems to get away with it because the joke is always told by a character who is not real and never admirable. (He has a regular stable of 20 or so characters, all with different voices.)

The guy's ability to ad-lib while going between being himself and being a character talking to himself (and occasionally he does two at a time), all while talking to a caller is uncanny.

I bring this up because it is a sad day. Phil announced last night that he is retiring from radio on June 23 to pursue his acting career. If you can catch his show before then, you should.
Posted by Rick Esenberg at 6:00 AM

I have heard him before. Very good stuff. Sad that he is hanging it up.

He has a face for radio.

I'd never heard of the guy until your post. Then I checked out his site and recognized his face.

I've actually become a regular viewer of Teachers on NBC because of him. He gets the best lines.

Well, him and that naughty blonde Brit...