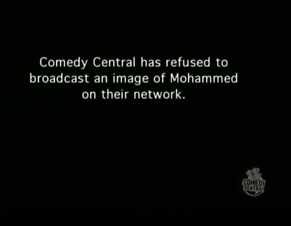 For you fellow South Park afficionados, what did you think when you saw this panel on Wednesday night's show? I wasn't sure that it wasn't part of the joke. Comedy Central lets South Park do just about anything. They have already shown images of Mohammed in their Super Best Friends bits. Why wouldn't they allow a depiction of Mohammed handing a football helmet to Family Guy?

For anyone who doesn't know the story, South Park ran a two-part episode featuring a story-within-the story. The nation was gripped in a panic because the Fox cartoon feature Family Guy was going to run an image of Mohammed. Muslims were rioting and frightened Americans were responding by (literally) burying their heads in the sand.

The kids rush to Los Angeles. And, in the end, Cartman and Kyle confront the president of Fox. Kyle urges him to "do the right thing." He explains to him that fear is how terrorism works and makes an impassioned plea for free speech. Cartman, who wants the episode pulled because he hates Family Guy (its "jokes are interchangeable and unrelated to the plot")holds a gun on him. In the end, he decides to run the image, but, just when Mohammed is supposed to appear, the screen goes black with text describing the scene and explaining that Comedy Central would not allow an image of Mohammed.

Parker and Stone then twist the knife by showing a final scene (in a cartoon that is supposed to have been made by Zarqawi in response to the depiction of Mohammed) showing President Bush and Jesus defecating on the American flag.

Apparently this is all no joke. Comedy Central gave the show two choices. South Park could censor the image or it would. The show's producers decided to do it themselves so they could make clear whose decision it was and that it was done out of fear and not sensitivity. You can read more about that at the Volokh Conspiracy.

What's interesting about this is that there is no sense in which the image itself was derogatory. While the panel going around the internet is apparently bogus (Peter at Texas Hold 'Em, who calls the network "Coward Central" links to it here; Michelle Malkin who initially put it up collects its debunking), there was an animated scene that was ready to run and it literally (and only) shows Mohammed handing a football helmet to Family Guy.

There isn't really much to add here. As Cartman puts it, Kyle's "gay little speech" says it all. If people who react in a vicous and nasty way to whatever gives them offense thereby earn the right not to be offended, the boundaries of free speech are determined by the least tolerant among us.

The reason that Comedy Central will show what are offensive and derogatory images of Jesus but not even a representation of Mohammed is not because it thinks it's "ok" to make fun of Christians but not "ok" to make fun of Muslims. It's because Christians do not express their offence by burning cars and beating people in the streets.
Posted by Rick Esenberg at 1:26 AM

Rick,
I looked over those real and fake stills and couldn't tell the difference between them.

My theory is that this is the last season of South Park, and that Stone and Parker will end it themselves. I think they used Family Guy as an allegory for the show, and announced their intentions to cancel it through the dialog if they got censored.

It's all a big publicity thing, you know. Parker and Stone are playing everybody.

end South Park Nick? wouldn't surprise me either, I guess. it's like Dave Chapelle ending his show. why not? when you have that much money, and you can't stand being pushed around by a corporation, you might as well stand up to them and make them take the financial hit.