Me am tough on terror. 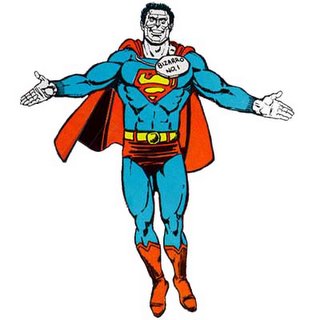 Charlie Sykes draws our attention to a piece by the formidable
Jonah Goldberg suggesting that the port controversy has flipped the normal approaches to terror. Bush is reaching out and offering a carrot to the Muslim world, while the Dems are racially profiling potential port managers. Kevin at Lakeshore Laments shares a great cartoon suggesting we have entered a world where everything is the opposite of what it normally is.

This was the conceit of the old Bizarro Superman comics. Everything in the bizarro world was flipped. As the poker-playing Peter points out, we now Bizarro Hilary Clinton suggesting that it would be awful to use public money to allow students to attend the School of the Jihad. Her cultural insensitivity is staggering.
Posted by Rick Esenberg at 12:20 PM

Typical Dems and media reaction. Political and not in the best interest of the U.S.