"People, boy, they wanted their martinis." 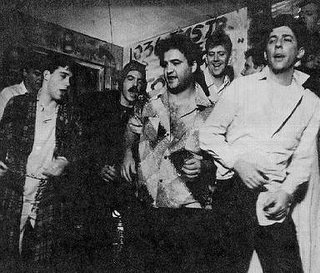 Hundreds of yuppies apparently engaged in a drunken riot at Milwaukee's Art Museum during something called Martinifest sponsored by Clear Channel and a bunch of area restaurants. Young sophisticates apparently left food, drink and vomit on the art work. Four young men climbed the statute of a goddess called "Standing Woman" with "exaggerated features" and, as we used to say. proceeded to second base. "We were hoping for a little sophistication, maybe," said Casey Rataczak, 27, a Wicked Hop bartender. "People were shoving their martini glasses in my face and not wanting to talk about the product . . . they were just worked up about getting their booze."

This wasn't a drunken mess; it was performance art. The attendees demonstrated what they thought of this notion that martinis are a gourmet item to be sipped while discussing the semiotics of a post-modern dadaist neo-deconstructivist piece of who know what it us anyway. "Get us drunk, man !" "Hey, I'd sure like a shot at "exaggerated features" like that." We haven't seen anything as thrillingly transgressive as this since "Piss Christ." Clear Channel says it going to put on Martinifest 2007. I'd like to see funding from the National Endowment for the Humanities.
Posted by Rick Esenberg at 8:39 AM