Thought Experiment No. 5 - More from the Meathead 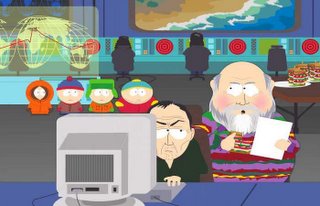 Yesterday's post on Rob Reiner attracted a fair amount of traffic from Hugh Hewitt's blog and its nice to see those folks. Reiner has now stepped down from the public commission he heads until the ballot initiative that he's been shilling for with tax money has been voted upon. The initiative, Proposition 82, creates a constitutional right to pre-school education. Its expected to cost 2.4 billion and will be funded by a tax of 1.7% on individual incomes over $400,000 and family incomes over $ 800,000. That's big money even in California. It will have no cost for 99.4% of the state's taxpayers.

Who could object to that? Why don't the eight of us vote to lift the wallets of those two over there? They look like they've got some cash and we've got numbers. No reason not to. It costs us nothing.

In fact, it seems like the Meathead is settling for small beer. Why not jack that tax up to 10%. Or 20? $ 800,000 probably probably gets you some higher end lawyers and pediatricians to the stars, but there's bigger game than that in west LA. Let's take 60% over, say, five million. That'll net us nine million or more on Brangelina's next movie alone.

Better yet, why limit our cut to income? Let's hoover up those trust funds! Who needs a Malibu beach house when class sizes are increasing? Why should Rob fly around in a Lear when No Child Left Behind remains underfunded? At this year's Academy Awards, when the beautiful people ask what they can "give back," I've got an answer.

this is so stupid im the first to leave a comment! and with that cool or fetch wich ever you perfer ( plz go to one of my blogs and tell me wich one i should use)south park picture! siriusly tell me caus i keep useing fetch

this is so stupid im the first to leave a comment! and with that cool or fetch wich ever you perfer ( plz go to one of my blogs and tell me wich one i should use)south park picture! siriusly tell me caus i keep useing fetch